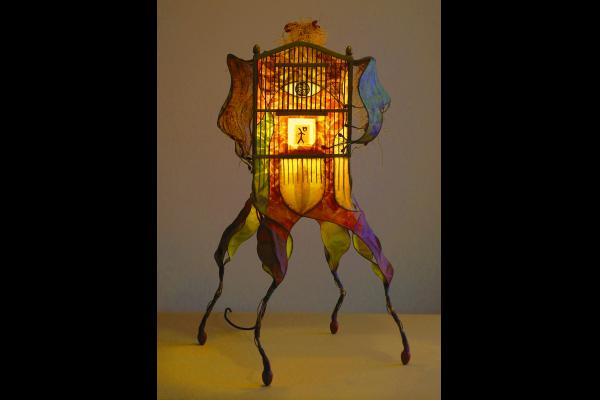 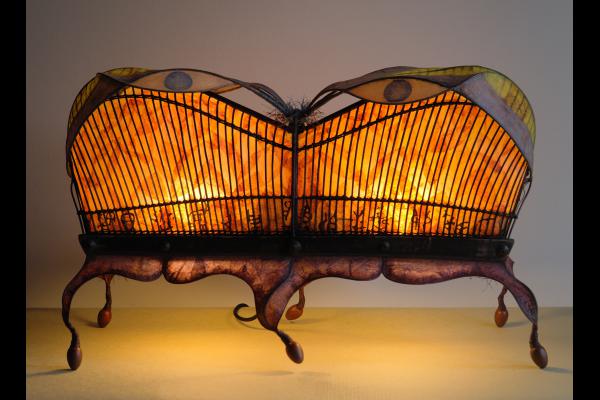 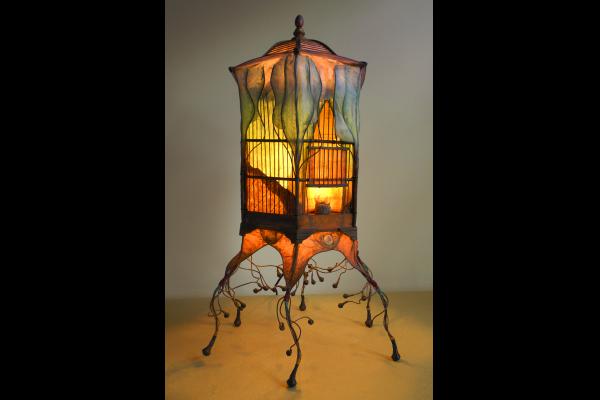 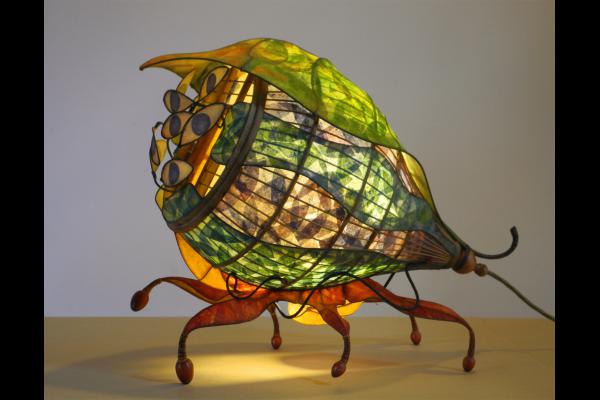 The Sky House series is an explorative thread of the broader Lumenhorse work, which has been ongoing for over twelve years. With the mixed media sculptures in this series, I transform Balinese birdcages made of bamboo and wood into creatures radiating light, color, nature, and freedom.

Beginning with the evocative form of a particular birdcage, I introduce copper wire one strand at a time: at first in response to the original architecture of the cage, then increasingly in support of the evolving character of the piece. The building of the armature is particularly intense, as the flow of metal is both structural and sculptural, supporting the cage in space as well as defining the greater form, within which the seminal cage increasingly becomes an integral part. Gradually, the entire piece becomes a fusion of plant, animal, architectural, and landscape elements.

In the process, the cage evolves in response to the whole: parts of it may be rearranged or disappear altogether as it’s integrated into the “bones” of copper and “flesh” of waxed linen thread and rice paper. While I start with a loosely envisioned sense of direction, most of the interplay of form and materials, as well as the nuance of detail, are left for the joy of discovery in the making.

Like the copper wire, the waxed-linen thread binding is both aesthetic and structurally crucial. As there is no soldering employed in joining the copper, the thread (actually more a multi-ply string) holds all firmly together, besides providing rhythmic sequences of fleshy color at intervals along the boney/sinewy strands of copper. The taut binding also offers potent contrast to the overall feeling of expansive liberation in the Sky House art.

The translucent surfaces are collaged from hundreds of hand-cut pieces of natural oil-colored rice paper of varying size and color, adding to the dimensionality of the layered forms. It’s important to me that the work has visual grace whether or not it happens to be emitting light. Shifting constantly between unlit and lit states, I often feel like I’m working on two pieces at once: the unlit version emphasizing surface, texture, and form; the lit revealing translucence, shadow play, depth of color, and hidden layers.

Applications for our 2020 show are now closed.

For information on how to apply for our 2021 show, please visit our website on December 1st, 2020. For more information on our show application process see our How To Apply page.