In 1997 the first Art In The Pearl Fine Arts & Crafts Festival was celebrated in the North Park Blocks of Portland’s Pearl District. The show, organized by fifteen artists who volunteered their time, was created to showcase high-quality, handmade works in a non-intimidating environment.

Now, as we approach our 27th year, the success of the show is due in large part to the expertise of those founding members. Together they drew upon their experiences in the Oregon Potters Association, Waterstone Gallery and CMAG and their rich history helping to build arts organizations such as Northwest Print Council and shows such as Art and the Vineyard, Local 14, Ceramic Showcase and various other arts events.

In many ways, Art In The Pearl was a response to the demise of ArtQuake, a longtime favorite outdoor arts festival. After 19 years, ArtQuake folded in 1995. The organizers of Art In The Pearl were determined to avoid what they considered the downfall of ArtQuake, namely a heavy reliance on corporate sponsorship money. 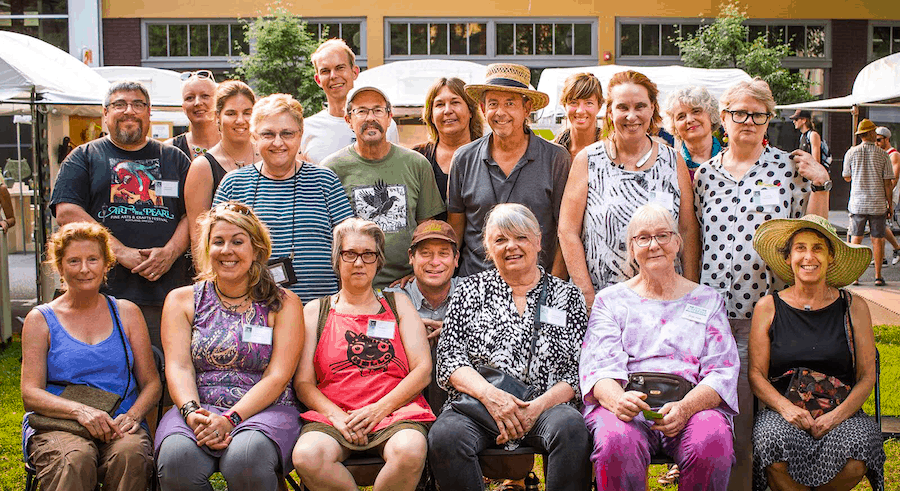 In order to keep expenses down, Art In The Pearl was established as a non-profit organization run entirely by a volunteer board of directors. Sponsorship amounts were kept relatively small and were spread over a larger number of donors. The focus would be on promoting the arts and artists and bringing the work directly to the public. There would be no admission fee, quality control standards would be stringent, and only original work would be permitted. Art In The Pearl would be an artist-friendly show organized by artists for artists.

In addition, the board members established the show in the North Park Blocks of the Pearl District rather than a city street. In 1997, the Pearl District was emerging as a hub of artistic activity. Small hardware and car repair shops were slowly giving way to artist studios and galleries. Waterstone Gallery had opened adjacent to the North Park Blocks on 8th and Everett in 1992, and the gallery’s artists recognized the park’s potential for an art event.

When the first Art In The Pearl opened on August 30th, 1997, the show’s mission was  “to build an interactive environment between the artists and the community.” In addition to artists’ booths, the show focused on art education, art demonstrations and performance art. An education booth was funded with support from Portland Art Museum, Art Media, Daniel Smith Art Supplies and the Oregon Potter’s Association. Local guilds were invited to give demonstrations, and The Portland Theater Alliance organized an entertainment stage.

The show has undergone many changes since 1997. The art education and demonstration areas have become more prominent, the entertainment stage is now dedicated to the region’s top world music performers, and the quality of art improves with each passing year.

However, Art In The Pearl remains a grass-roots movement. It is still run by scores of volunteers who believe in the importance of the arts in Portland. The show continues to be supported by donors who value the arts more than personal recognition, and the focus is still on building a bridge between artist and community.

Applications for our 2023 show are now open. Please look at our How To Apply page for information.